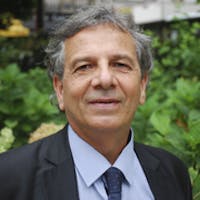 Professor of Environmental Economics. Co-founder and partner of Carbone 4

Alain Grandjean is a graduate of the Ecole Polytechnique of Ensae and holds a PhD in Environmental Economics. He is a co-founder and partner of Carbone 4, a climate strategy consulting firm. He is a member of the scientific committee of the Nicolas Hulot Foundation and of the Economic Council for Sustainable Development for the Minister of Ecological and Solidarity Transitions. In 2013, he chaired the committee of experts on the national debate on Energy Transitions. In June 2015, together with Pascal Canfin, he submitted the report ‘Mobilising Climate Finance - A Roadmap for Financing a Decarbonised Economy’ to the President of France. In June 2016, together with Gérard Mestrallet and Pascal Canfin, he submitted a report to the President of COP21 for carbon prices aligned with the Paris agreement. He is co-author of several books on the ecological transition: ‘Financer la transition énergétique’, written with Mireille Martini and published in 2016 by ‘Editions de l' Atelier’, which won the Marcel Boiteux energy saving prize with ‘Miser (vraiment) sur la transition énergétique’, ‘Editions de l' Atelier’, 2014 (with Helene Le Teno), ‘Les Etats et le Carbone’, PUF, 2009 (with Patrick Criqui and Benoit Faraco), ‘C'est maintenant’, Le Seuil, 2009 (with Jean-Marc Jancovici), ‘Le plein s'il vous plaît’, Le Seuil, 2006 (with Jean-Marc Jancovici), ‘Environnement et Entreprises’, Village Mondial, 2006 (with Dominique Bourg and Thierry Libaert) and ‘La monnaie dévoilée’, L'harmattan, 1997 (with Gabriel Galand), He is the creator and host of the ‘Chroniques de l'anthropocène’: http://alaingrandjean.fr/