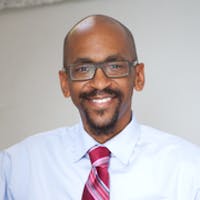 Sean Vereen, Ed.D., is the President of Steppingstone Scholars, Inc. Since 1999, Steppingstone has operated under the belief that the quality of a student education and their chances at bettering their life should not be defined by their socioeconomic status, race, or zip code. Steppingstone works with families, students, partner schools, and sister nonprofits to create opportunities for talented educationally underserved students that lead to college degree attainment. Under Dr. Vereen’s leadership, Steppingstone has launched a number of new innovative programs that have increased the organization impact and scope. He has built strategic partnerships with the School District of Philadelphia, as well as a number of the region's leading universities including Temple University, University of the Sciences, Drexel University, and the University of Pennsylvania. Dr. Vereen supervises a full time staff of 11, part-time teaching staff of 30, reports to a 23 member Board of Directors, and annually raises a budget of over $1.2 million. Previously, Dr. Vereen worked at the University of Pennsylvania for 13 years in a number of positions focused on diversity and student academic and extracurricular life. In his last position at Penn he was the Associate Dean of Opportunity and Access in the Office of Admissions. He oversaw initiatives focused on the cultural and socioeconomic diversification of the undergraduate student body. Under his tenure, the population of underrepresented minority students (Black, Latino, Native American) increased 32% in a 4-year period. In 2012, the underrepresented minority population reached 20% of the overall undergraduate student body - the highest percentage and number in Penn’s 272 year history. Dr. Vereen received his Ed.D. in Higher Education Management from the University of Pennsylvania Graduate School of Education in 2005. His research focused on how leaders of minority focused resource centers navigate a complex higher ed institution. He is a guest lecturer on issues of social and educational mobility and inequality, narrowing the achievement/service gaps for educationally underserved students, and how to diversify educational institutions.

How to Apply to College