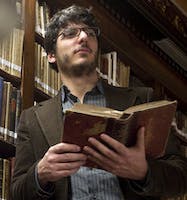 Research and Teaching Scholar at University of Barcelona

Pau Castell holds a BA in History, an MA in Medieval Cultures and a PhD in Medieval History by the University of Barcelona. He was awarded a pre-doctoral fellowship by the Spanish Government (2008-2012) for the completion of his PhD on the History of Witchcraft and Witch-hunts in the Catalan territory, which he secured on December 2013 and for which he received the 2014 award as Best Doctoral Thesis in Medieval History by the Noguera Foundation. He has carried out his research in several French, Catalan and Spanish archives as well as in international universities such as the Université de Lausanne (Switzerland) and the University of Oxford (United Kingdom). He has published extensively on the subject of witchcraft and witch-hunts during the 15th and 16th centuries and he is the instructor of Units 1 and 3 of this MOOC.

Magic in the Middle Ages