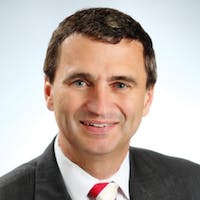 Dean Zupan assumed his duties at the Simon School on a full-time basis on January 1, 2004. He is responsible for the administrative and academic functions of the Simon School, and serves as the leading advocate of the School’s faculty, programs and students to the business community and other external constituencies.

Zupan served as dean and pro­fessor of economics at the University of Ari­zona’s Eller College of Management from 1997 to 2003. Among his accomplishments at Eller were highly successful fundraising efforts, a record of promoting scholarship, fostering innovation in academic programs and enhanced community outreach.

Before his appointment at Arizona, Zupan taught at the University of South­ern California’s Marshall School of Busi­ness, where he also served as associate dean of master’s programs. He was a teaching fellow in Harvard’s Department of Economics while pursuing his doctoral studies at M.I.T., and he has been a visiting faculty member at the Amos Tuck School of Business Ad­min­istration at Dartmouth College.

Zupan’s research interests include water policy, the influence of economics and ideological preferences on the political behavior of voters and elected officials, industrial organization, regulation and political economy. He has re­ceived research grants from the National Sci­ence Foundation and the Center for Inter­na­tional Business Education and Research at the University of Southern California. He is the co-author of two books: Micro­economic Theory and Ap­plications (with E. K. Browning), published by John Wiley and Sons, and Micro­economic Cases and Applications (with T. W. Gilligan and A. M. Marino), published by HarperCollins.

Zupan is also the author of numerous scholarly articles which have appeared in leading publications including the American Economic Review, Journal of Law and Economics, Rand Journal of Economics, Public Choice, and Journal of Regulatory Economics. His opinion pieces have appeared in such outlets as The Wall Street Journal, The New York Times, the Financial Times of London, Los Angeles Times, Arizona Republic, BusinessWeek.com, Democrat and Chronicle (Rochester, NY) and San Francisco Chronicle. He has served as co-editor of the journal Economic Inquiry, and is on the editorial boards of Public Choice, Journal of Business Economics and Research in Law and Economics.

The Power of Markets III: Input Markets and Promoting Efficiency

The Power of Markets I: The Basics of Supply and Demand and Consumer Behavior

The Power of Markets II: Market Structure and Firm Behavior