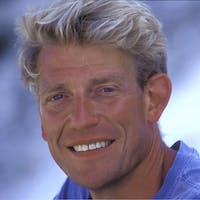 Bruce W. Fouke is a professor in the Departments of Geology and Microbiology, and the Biocomplexity Theme in the Institute for Genomic Biology, at the University of Illinois Urbana-Champaign (UIUC). He also serves as Director of the Roy J. Carver Biotechnology Center. Professor Fouke specializes in integrated geological and biological studies of: (1) the rate and mechanism of evolution of Bacteria and Archaea across steep environmental gradients; (2) the control of sea surface temperature on coral reef ecosystems in the Caribbean and the global emergence of infectious marine diseases; (3) the response of heat-loving (thermophilic) bacteria in Yellowstone and Turkey to changes in hot-spring water flow rate, chemistry and temperature; (4) microbially enhanced hydrocarbon recovery in deep subsurface oil and gas rock reservoirs of Canada, Alaska and Ireland; and (5) the timing and cause of the last flow of water in the aqueducts of ancient Rome and Pompeii.