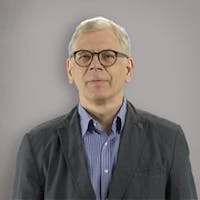 Professor of universities of France

Valery Gritsenko is the French-Russian mathematicians originally from St. Petersburg where he was a head researcher of Stekolov Mathematical Institute (POMI). Since 1998 he is professor of the University Lille 1. V. Gritsenko is a member of the executive committee of the Laboratoire d’Excellence CEMPI (Centre Europ`een pour les Math`ematiques, la Physique et leurs Interactions) of the University Lille 1 and senior member of Institut Universitaire de France (IUF).

In 2015 and 2016, Valery Gritsenko is an international chief research fellow of the Bogomolov Laboratory of Algebraic Geometry of the National Research University "High School of Economics" in Moscow. He leads a research seminar “Automorphic forms and their applications”.

In 2015, V. Gritsenko gave two semester courses on Jacobi modular forms and their applications. The current course at Coursera reflects the method of teaching of Russian mathematical school and the new traditions of the Department of Mathematics of HSE.