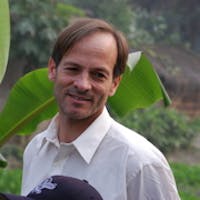 In August 2015, Peter Small joined Stony Brook University as the Founding Director of the University-wide Global Health Institute. The Institute is already distinguishing itself as a highly collaborative, transdisciplinary campus based program that includes teaching, research and service with a mission to reduce poverty, ecological devastation and disease in Madagascar and other poor countries. Immediately prior to joining Stony Brook, Peter worked for the Bill and Melinda Gates Foundation for nearly 13 years where he was responsible for developing the foundation’s tuberculosis strategy, building the programs core partnerships and country programs, hiring and managing the TB team, overseeing the vaccine, drug and diagnostic product development activities and serving as the foundation’s voice for tuberculosis. In 2011 he relocated to India where he established the foundation’s tuberculosis program in India, specifically focused on the ways in which innovative technologies and evolved health care delivery systems might accelerate the decline of tuberculosis incidence. Peter completed his postgraduate training in internal medicine at UCSF and infectious diseases at Stanford University before spending about a decade on the faculty of Stanford’s Division of Infectious Disease and Geographic Medicine. Peter has published more than 150 articles including molecular epidemiologic studies that helped to shape the public health response to the resurgence of tuberculosis in the USA in the 1990’s and seminal papers on the origin, nature an consequence of genetic variability within the species M. tuberculosis. He is a member of several honor societies such as Alpha Omega Alpha Honor Medical Society, American Society for Clinical Investigation, was awarded the Distinguished Alumnus Award from his alma mater, the University of Florida and is a fellow in the American Academy of Microbiology He is a recipient of the Princess Chichibu Global TB Award for his pioneering contributions to global tuberculosis control.