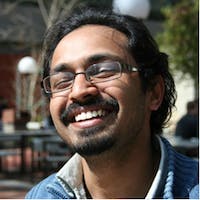 M. Pawan Kumar is an assistant professor in the Center for Visual Computing at Ecole Centrale Paris and a member of the GALEN group at INRIA Saclay, Ile-de-France.

Prior to that, he was a postdoctoral researcher at Stanford University (2009-2011) and the University of Oxford (2008). He received his Ph.D. in Computing from Oxford Brookes University in 2008. His thesis was awarded the BMVA Sullivan prize. His research interests include machine learning and its application to high-level computer vision problems.