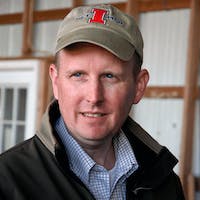 Dr. Lowe is 1994 graduate of the University of Illinois College of Veterinary Medicine and has been working with swine production companies across the United States since that time. Dr. Lowe completed the college’s Executive Veterinary Program in Swine Health Management in 2000 and returned to campus as a student in 2002 while continuing to practice full time. In 2005 he received a master of science degree in infectious disease management. He has maintained an active research program since completing his master’s, focusing on the management of viral respiratory disease in swine production systems. In 2012 he became board certified in food animal practice by the American Board of Veterinary Practitioners.

From 1997 to 2003 Dr. Lowe was a co-owner of Professional Swine Management, LLC and Carthage Veterinary Service, Ltd. in Carthage, Ill. In 2003 Dr. Lowe joined The Maschhoffs Inc. in Carlyle, Ill., as its director of health and production services. The Maschhoffs Inc. is one of the ten largest pork producers in North America, and Dr. Lowe led its breed-to-wean business and the health services group while the company expanded from 25,000 to 110,000 sows. Dr. Lowe returned to private practice in 2007 while continuing to work with The Maschhoffs, LLC. In 2009 Dr. Lowe accepted a part-time appointment to the faculty of the University of Illinois College of Veterinary Medicine, where he teaches production medicine. In 2011 he founded Lowe Consulting Ltd. to focus on assisting livestock producers with strategic decision making and process improvement. He has served on the American Association of Swine Veterinarians Board of Directors, was the recipient of the 2007 Allen D. Leman Science in Practice Award, and presented the 2010 Howard Dunne Memorial Lecture.