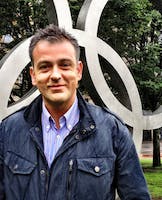 Emilio Fernández Peña is Director of the Olympic Studies Centre at the Autonomous University of Barcelona (CEO-UAB), Professor Titular of Audiovisual Communication and holder of a PhD with Outstanding Award from the University of the Basque Country (2001). He has led the first research project on Social Networks and the Olympics, which was commissioned by the International Olympic Committee (IOC). He has also been a consultant on television production and media history for the new Olympic Museum 2020, the International Olympic Committee in Switzerland. He is the head of the ‘Module on Media and Commercialisation’ of the Master of Arts on Olympic Studies, in which four European universities participate. Dr. Fernández is author or editor of more than 45 academic publications on media and the Olympics, sport and TV rights, pay television history, management, regulation and marketing, among other issues. He is also author of the book entitled Juegos Olímpicos, Televisión y Redes Sociales, and has been an invited lecturer in universities of the USA, China, Qatar, Brazil, Greece, Italy and Russia.

The Olympic Games and the Media