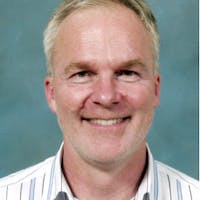 After graduating with a veterinary degree from the University of Liverpool in 1984, Dr. Brian Aldridge completed an internship in food animal medicine and surgery at Louisiana State University before returning to general practice in the UK. Following a two-year stint as a lecturer in large animal medicine at the Royal Dick School of Veterinary Studies in Edinburgh, Dr. Aldridge completed a food animal medicine and surgery residency and master’s degree at Colorado State University and became a diplomat in the American College of Veterinary Internal Medicine. He then returned to general practice for a time before enrolling in a PhD program at the University of Wisconsin-Madison, where he studied the transfer of colostral leukocytes to the newborn calf. On completion of his graduate studies in 1999, Dr. Aldridge worked as a post-doctoral scientist in the Department of Pathology, Microbiology, and Immunology at the University of California-Davis and in association with the Marine Mammal Centre, Sausalito, studying marine mammal immunology and immunogenetics. During this period he also worked as a large animal clinician in the UC Davis Veterinary Teaching Hospital. In 2003 he joined the founding faculty of the Western University of Health Sciences College of Veterinary Medicine as an associate professor of large animal medicine and an adjunct professor at the California State Polytechnic University College of Agriculture. In 2005 Dr. Aldridge returned with his family to the UK, where he held the post of professor of farm animal health and production at the Royal Veterinary College, and then worked as farm animal clinician at the University of Cambridge. He now works as a clinical professor in rural animal health management at the University of Illinois College of Veterinary Medicine. Dr. Aldridge’s main clinical interests are in farm animal medicine and the interface between health and production in growing animals. His primary research interests are in adaptive and transitional health in young animals. He also has a strong enthusiasm for teaching and learning, particularly as it relates to the advancement of animal health, welfare, and production globally.